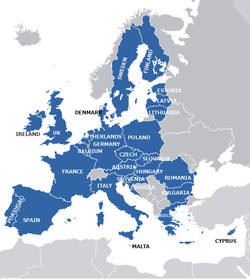 Each ECHA country will appoint a president and any other needed officers. The president will be the liaison to ICHO.
A yearly activity report is required to be sent to ICHO beginning of new year in Jan.

The purpose of the ECHA is unite all EU countries and their members that own or breed Curly Horses.
ECHR- European Curly Horse Registry- a department of ICHO for all EU born Curly Horses.
All Curly horses born in EU countries will be registered in ECHR thru ICHO. Applications will be by email to the ICHO office for entry into ECHR and certificates will be sent PDF to the ECHR registrar. The ECHR registrar will print all certificates and mail them to the owner along with Passports.
(﻿Passport issuing needs to be discussed, who can do it and how to get it approved, etc﻿)


Idea for PDF ECHR registration certificate,printed to size of Passport:

Letter from Lene!
First section is her suggestions and then the EU rules for associations and studbooks, all breeds.
MAIN SECTION (only for D and SC curlies)

A. Both parents registered curlies after the breeding rules in the country
B. A foal from an organized cross breeding programme (one parent in the main section and one parent from an approved and listed outside breed), after application before breeding Bunny- Should it be mandatory all horses used in Cross breeding be inspected and approved in their country to breed and registered in their breed registry?)

·         European rules for keeping a registry and stud book

Here are the rules for horse breeding associations in Europe, my comments in brackets []

1. To qualify for entry in the main section of the Registry of its breed a registered equidae must:
- be descended from parents entered in the main section of a Registry of that same breed and have a pedigree established in accordance with the rules of that Registry [OK, offspring from two Curly reg. parents qualify]
- be identified as foal at foot according to the rules of that Registry, which at least should require the covering certificate [sets minimum rules for identification to ensure correct parents, now almost all registries uses DNA verification in addition]

2. In derogation from the first indent of paragraph 1, an animal can be entered in the main section to take part in a cross breeding programme approved by the organization or association according to the rules of that Registry [so a non Curly could be allowed to sire or produce curlies that would be eligible for the registry if it was part of a cross breeding program. This is important, because the cross breeding should be for improvement and not for making a quick buck by breeding mares of little value in their own breed or mares without papers to a Curly stallion just to get curlycoated foals.]
The cross breeding programme should mention the breeds which are allowed to take part. [European Curly breeding associations that accepts cross breeding have done this, and limits crossbreeding to the American breeds which blood flows in the foundation curlies, such as quarter, appaloosa, Missouri fox trotter etc, and to Arabs and WB in addition, and some pony breeds, mainly American miniature and POA.]

1. The main section of a Stallion/Mare Book may be divided in conformity with No 3 (b), fifth indent, of the Annex of Commission Decision 92/353/EEC (2) laying down the criteria for the approval or recognition of organizations and associations which maintain or establish stud-books for registered equidae into several classes according to the animals' merits.
[Here it means that stallions and mares entered into the Stallion and Mare Books must show some merit, for instance being approved at an official inspection, we have this with NACHIP, the European inspections and entering into ICAMS. One can have classes based on merit, for instance Stallion Book I for stallions getting a score of 80% and higher and Stallion Book II for stallions getting a score of 70% and higher.]

Only equidae meeting the criteria laid down in Article 1 may be entered in one of those classes.
[Only horses with both parents being Curly registered can qualify for the main sections of the Stallion and Mare Books.]

1. An organization or association keeping a Registry may decide that an animal, which does not meet the criteria laid down in Article 1, may be entered in a supplementary section of that Registry.
[Here we can accept curlies of unknown parentage].

The animal must meet the following requirements:
- be identified in accordance with the Registry rules,
- be judged to conform to the breed standard,
[this is common for instance with Tinkers (Gypsy Vanners) that comes to Norway from Ireland with unknown pedigree. To be entered into the Tinker registry in Norway they are shown at an inspection and judged to be breed typical. This also are done with warmblood as there are so many warmblood mares imported for instance from Denmark without pedigree. If the mare is judged to resemble a warmblood it can be intered into this division].
- have a minimum performance as laid down in the Stallion/Mare Book rules.
[saying that the horse of unknown parentage must score so and so much to be accepted]

2. The organization or association should fix the rules allowing progeny of such animals to enter the main section.
[very important point – one can breed with such a horse to a horse from the main section and the offspring should be accepted into the main section]

SO, what does this mean? A registry and stud book set up this way in Europe is representing a BREED. If it is a blood breed, coat breed, color breed, it doesn't matter. Warmbloods, sport ponies, pintos are all of a mix of breeds and continuous cross breeding is taking place, mind you, in an ORGANIZED cross breeding programme.

You cannot take a TB and breed to a Belgian draft and call the offspring a Warmblood. But routinely TB stallions are inspected and approved for Warmblood breeding. Trakhener stallions are accepted into the Holstein Studbook and so on. Pintos for instance have sections based on type and also accept crossbreeding to certain other breeds that fits within each type. Some blood breeds, like the Welsh, have different types and sizes within its blood breed.

In Europe the American Curly is accepted as a breed. It is fine to educate people like we do, that the Curly Horse is a mix of many breeds and one Curly cannot be considered a "Purebred" because of this. But it is no less a BREED because of it.

I remember Dyan Westvang used to say that the MFT is not a "breed" but a "registry". Which is correct but for all practical purposes we think of the MFT as a "breed". Then we can educate people about the origins of the MFT which are the ASB and the TWH and then horses before that again.

The solution, IMO, to more than one issue, is to have a Foundation Division, within ICHO (Bunny- can we do this for ECHR foundation horses?? It has not been widely received in US to do this in NACHR, but could be easily done in ECHR horses). For Dominant Curly Horses of North American origin, foaled before January 1st 2002 and for all horses foaled after this date but with both parents in the Foundation division.
The curlies that are not eligible just continue as before, being registered in the NACHR.

Let's Keep working on the solutions for ECHA and ECHR! Thanks everyone for your valued input!!
International Curly Horse Organization